The modern Product Manager role can be traced through a chain of events starting in the early 20th century when an enterprising young economist asks, "How can I sell more soap?"

͠
*This is a story of how industry moved from manufacturing-centric to customer-oriented, the moment product management duties moved from distributed company functions to an individual responsibility, and how the Product Management role emerged in Silicon Valley where it evolved and was codified.*

I'd like to introduce you to Dr. Paul Smelser, our first non-linear thinker of the story.

In 1923, "Doc" Smelser, a PhD economist from Johns Hopkins University, joined the Procter & Gamble Research Department - tasked with forecasting commodity markets. While his colleagues put their economics degrees to work building predictive models, Smelser asked questions like "What percentage of Ivory soap is used for face and hands and what percentage for dishwashing?"

Smelser's line of inquiry had a unique theme: what are the habits of the customer.

When these questions made their way to P&G management, they were at a loss for answers. This ultimately led management to an inevitable conclusion: that the "wives of the management were no longer representative of all consumers in the United States." - Were they ever?

By 1924, enlightened executives asked Smelser to establish the P&G Market Research Department with a mission to gain a deeper understanding of the customer.

Smelser's Market Research Department took a novel approach at the time: to learn about customer habits his team would interact directly with the customer.

Over time, the Market Research Department expanded it's scope of investigation. Research of retail distributers entailed surveying stores and uncovering minute details such as the size of shelving to understand how products would fit.

The Department extended to competitive research. Field investigators would apply their surveys and tactics to learn about competing products - a strategy so foreign at the time that at least one competitor accused P&G of being spy's and filed a lawsuit.

Smelser's customer oriented efforts provided a competitive advantage that enabled P&G to become a dominant force in consumer packaged goods. And it's in this environment that our hero would rise.

In the summer of 1925 in Cincinnati, Neil McElroy is walking door to door distributing samples of a new Procter & Gamble product: Camay soap. Neil had recently graduated from Harvard with a bachelor's degree in economics and was saving money for an eventual return to Harvard Business School. 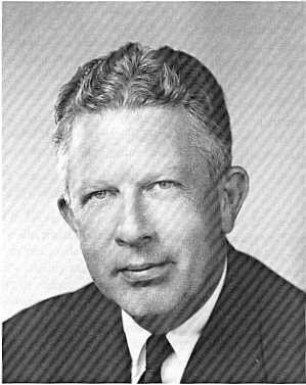 During his summer job, a supervisor recognized Neil's hard work and took Neil under his wing. Eventually Neil was convinced to stay on at P&G full time, foregoing Harvard Business School.

Neil moved from handing out soap samples to working as a mail boy. Neil would quip that he learned about business by reading the mail he was delivering, and it wasn't long before Neil joined the P&G Advertising Department.

Neil's summer supervisor's assessment must have been right, because by 1931 Neil became a junior executive at the Advertising Department responsible for the Camay soap he had previously handed out door to door as a new college graduate.

͠
Ivory soap was introduced by Procter & Gamble in 1879. Ivory is one of P&G's first products and it dominated the market against competitors Palmolive and Lever Brothers. Ivory also competed (and won) against internal products such as Neil's Camay soap brand.

Camay faced even further challenges. Richard Deupree, President of Procter & Gamble, had enacted a policy that other internal products "must not be allowed to hurt, or to compete too directly and vigorously with, Ivory Soap." Camay was at an institutional disadvantage.

Despite the challenges, Neil had a strong opinion that each P&G brand should be allowed to compete as forcefully with each other as they would with outside competitors. He believed every brand within P&G must be able to stand on it's own feet, unencumbered by internal anti-competitive policies. And Neil wanted to make Camay soap successful.

Driven by this vision (and the ever present desire for more resources), Neil made a proposal to hire two new people in two newly conceived roles: the Brand Manager and Assistant Brand Manager (so-called "Brand Men"). This proposal was communicated in a 3-page memo in 1931. 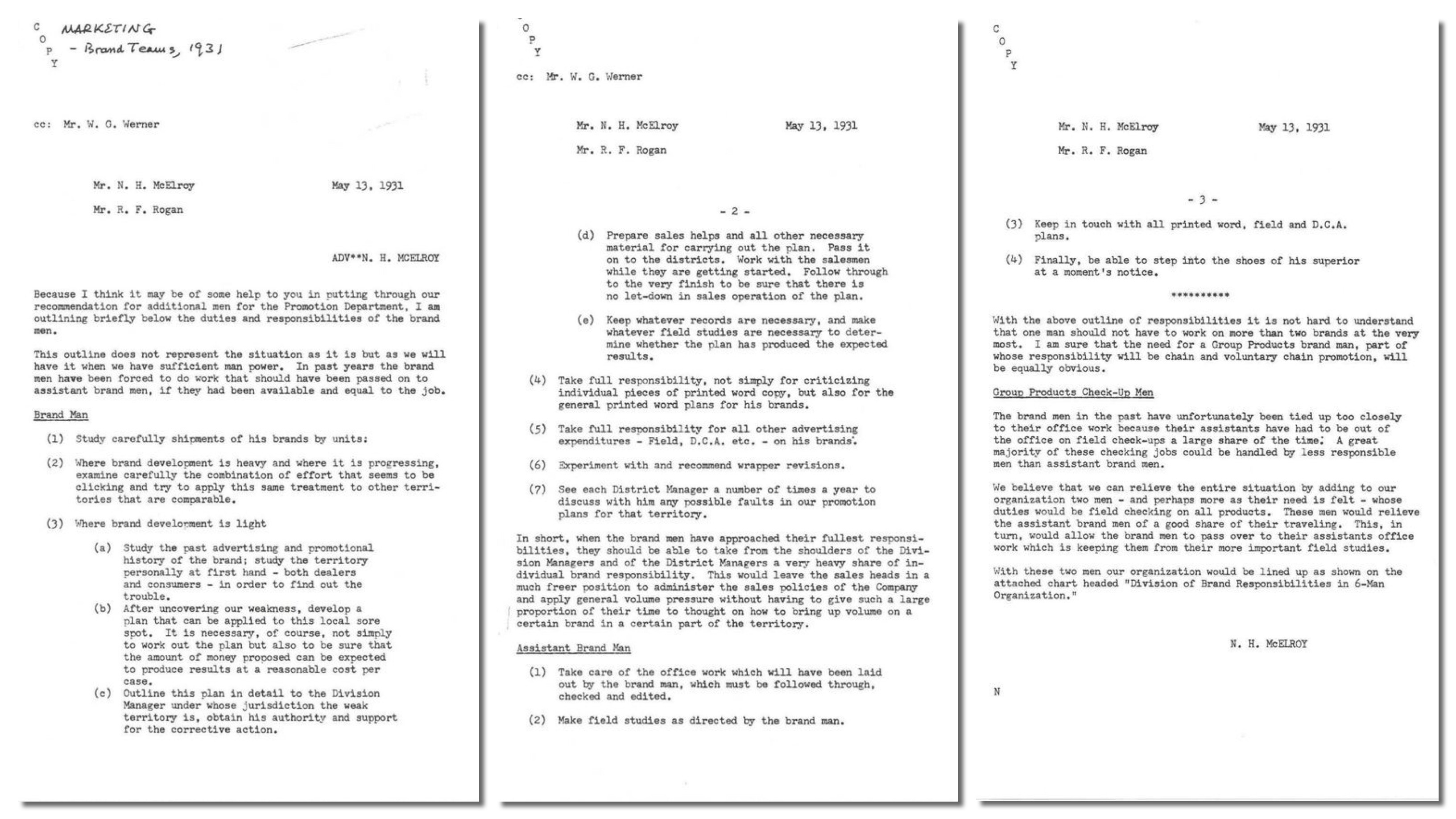 Neil's great insight was to take product responsibilities distributed amongst different departments and consolidate them into a single job: the Brand Manager.

Neil's Brand Manager is a seed of the modern Product Manager and we can see in his memo the consolidation of product functions into a single role. Notably, Neil writes about:

"Study carefully shipments of his brands by units"

"Where brand development is heavy ... and progressing, examine carefully the combination of effort that seems to be clicking and try to apply this same treatment to other territories"

"Study the past advertising and promotional history of the brand; study the territory personally at first hand - both dealers and consumers - in order to find out the trouble"

"Develop a plan that can be applied to this local store spot. ...be sure that the amount of money proposed can be expected to produce results at a reasonable cost per case."

"Prepare sales helps and all other necessary material ... Work with the salesmen while they are getting started."

"Experiment with and recommend wrapper revisions"

"Make whatever field studies are necessary to determine whether the plan has produced the expected results."

"When [brand managers] have approached their fullest responsibilities, they should be able to take from the shoulders of the Division Managers and of the District Managers a very heavy share of individual brand responsibility."

"This would leave the sales heads in a much freer position to administer the sales policies of the Company ... without having to give such a large proportion of their time to thought on how to bring up volume on a certain brand"

The memo was circulated amongst executives until it finally reached the company President, Deupree, who endorsed it and Neil gained his new hires and new roles.

͠
Years later, Deupree took a dramatic step and completely **restructured the company into business units with responsibility and accountability aligned to brands**, a 180 degree shift from the protectionist policy for Ivory soap.

Stay tuned for The History of Product Management - Part 2, The Valley, where we will explore the connection between soap, software, and the emergence of the modern Product Manager.

Success cannot be achieved by a singular moment of inspiration. Success is achieved by discovering and executing on one idea after another, over and over, while having more successful ideas than not. To do this, you need to have a system that when combined with your creativity, insight, and wisdom 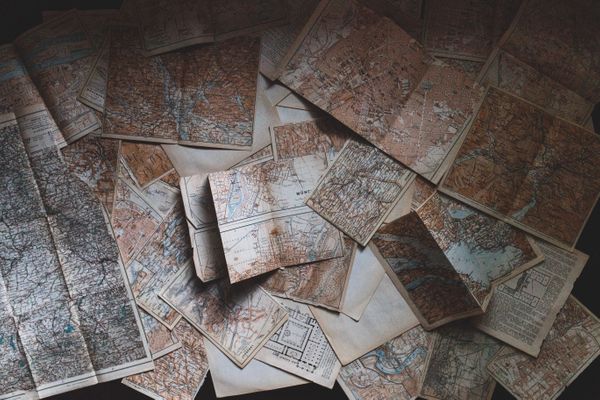 I had the opportunity recenlty to attend a lecture by Edward Tufte in San Francisco. I entered not knowing what to expect, and I suppose my expectation was that I would be taught a set of practical tactics I could use in my day to day work. I was wrong.

Slow is the persistent constraint of product development. Engineering teams move too slow, customers move too slow, finance and legal move too slow. So how do we combat slow? Let's change our perspective and look at slow as an attribute that forces us to be better. We can't change the